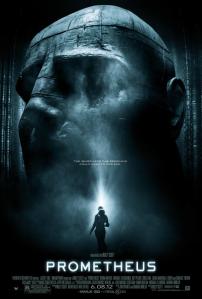 I’ve just gotten back from seeing  Prometheus, a Sci-fi Horror film by Ridley Scott following the story of a group of scientists on an expedition to discover the origins of humanity on a planet many light years away from Earth. The story predates and is tangential to the events of the first ‘Alien’ film, taking place within the same universe.

As some of my good associates and close friends would know, this has been one of my most highly anticipated films of the year. After all this is Ridley Scott, one of the most accomplished directors of the past two decades, responsible for two of  the most iconic and influential films of sci-fi cinema, the original 1979 film ‘Alien’ and the 1982 sprawling future-noir classic ‘Blade Runner’. To see him return to helm another Science-fiction film after a near 30 year long hiatus from the genre should be a cause for celebration to any avid film goer, especially Sci-fi fans.

So when I tell you how polarizing, how bewildering, how utterly repelling of an experience it was to watch this film, let alone articulate a reaction to it, you know I say this with with very little ease or enthusiasm. This was not the film I was looking for.

There has seldom been a time that I have felt so underwhelmed by something that is so otherwise  ambitious. For all its grandiose promise of being an intelligent science-fiction epic tackling with one of if not THE most immense question of humankind (Why are we here, Who or what made us, and why?), it feels oddly lacking in both intelligence and humanity.

To the film’s credit the overarching theme of the story, the conflict between faith and science in answering the one great existential question of humanity is front and center  throughout the entirety of the movie. But the lack of meaningful interactions between a majority of the central cast renders this message with a curious mix of  shallowness and unsubstantiated audacity. The horror scenes do little to accomplish their purpose in terrifying and raises the question as to why this film was considered for a R rating to begin with.

According to the text overlaying the first on screen appearance of the titular spaceship there are a total of seventeen people on board the Prometheus, which include the five members of the principal cast and whom I can only recall as twelve disposable red shirts ready to lay down their lives for the pursuit of science or monetary gain, it doesn’t really matter which apparently.

There is a dense if at times overwhelming wealth of powerfully intriguing visuals in this film, owed to the production designer Alex Max and his team. But pretty things can carry a film only so far.

The brazen dismissal of causality or explanation for the most basic of plot elements and the utter absence of logic on part of the actions of the main cast make it difficult to discern what if any of the film’s unexplained mysteries are either deliberate for the sake of exploration in future films or just glaring oversights on part of the director and production team. There are too many absences for what exactly are the motivations of Alien “antagonists” (that’s a good question, who the hell are the antagonists in this movie?) or common sense among the crew of the Prometheus (You are on a desolate alien world far far away from Earth with a toxic environment right outside of you, what in your mind would compel you to take off your helmet or reach out and touch that damn thing!)

I’ve read from some favorable critics that these omissions are perhaps throwbacks to the ineffability of old school Lovecraftian Horror, but I’m calling bullshit on that. The scope and scale of the ‘Engineers’ actions and ambitions in Prometheus feel trite and trivial when compared to the cosmic horror of the Old Gods.

I think I went into this movie with too lofty expectations. I wanted to like this film, hell I wanted to absolutely love this film. It’s been so long since there has been a major sci-fi film with a provocative premise released in mainstream theaters that I was hoping that this film could be a dambreaker ushering in a new wave of awesome films (and no, Battleship does not count as a high concept science fiction movie). Perhaps that was unfair of me on my part, but at the very least I expected this film to be good let alone coherent.

‘Prometheus’ was supposed to be the reinvigorating adrenaline shot into the still heart of the ALIEN franchise, a franchise which as of late  has been rendered comatose and irrelevant by a series of lackluster sequels and shamelessly abysmal  crossovers. Forget about revival, this is wacky waving over-inflated nonsense.

To paraphrase the ending line of the movie,

“Do not come here, do not see this movie. There is only death and disappointment here.”

Sites and Writers I frequent