I don’t know exactly where or remember when I first heard about Lunar Software’s Routine, but I definitely know it’s stuck in my mind ever since. Routine is a neon-tinged, cerebral sci-fi first-person horror game set on an abandoned Moon base.  You play as an engineer responding to a distress call (sound familiar?) Your job is to find enough data to uncover the truth behind the strange disappearance of everyone stationed on the Lunar Research Station.

The game’s website promises an immersive, non-linear experience exploring a derelict space station, deadzone ironsight aiming with a multi-use modular pistol, and a brutally merciless Permadeath system with full-body awareness accentuated with the awesome Oculus Rift peripheral. Run, Think, Hide, Shoot, and Survive against a host of psychotic drone robots, an automated security system dedicated to liberating your skin from your skeleton, and whatever unfathomable cosmic horror that happens to be left dead and dreaming beneath the station’s crisply antiseptic veneer.

Routine’s technically-exquisite Alpha footage brings to my mind two unapolegtically favorable comparisons.  The first is obviously Dead Space, but the second is a little more obscure. Nevertheless, this game looks like  what the original Dead Space should have played like.

Where Dead Space emphasized desensitizing, gratuitous body-horror devoid of the phantasmagoric nuance of the genre’s forebears, Routine looks promising because it puts atmosphere first, stoking the terrifying long draw of brewing fear past the brink of bearability before exploding into a fierce, deliberately disadvantageous confrontation. That, and it looks like you’ll actually be doing some actual engineering in this game (e.g. computer hacking, mechanical node switching, etc.) instead of just chopping Eldtrich flesh ghouls in half with comically-overpowered laser pointers. 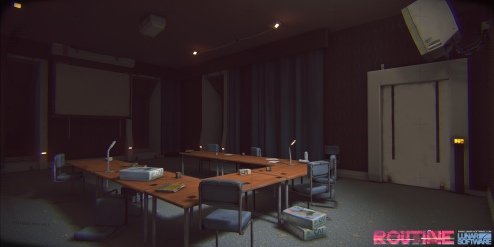 My other comparison is that of the 2012 Half-Life 2 mod  BLACK SNOW by Team MONOTHETIC. The BLACK SNOW mod is probably one of the most terrifying and thoroughly satisfying horror games I’ve ever played; a brilliant homage and diligently thought-out video game equivalent to John Carpenter’s The Thing. If Routine approaches even a fraction of BLACK SNOW’s execution, I’ll call it a victory for horror fans everywhere.

Lunar Software have yet to announce a definitive release date, but odds are pretty favorable that with their recently ramped-up press initiative, the humming neon-saturated light at the end of this game’s long development tunnel is nearly in sight. Let’s hope for a Routine-rich end to 2013!

Sites and Writers I frequent

Sifting Through Patterns by Toussaint Egan is licensed under a Creative Commons Attribution-NonCommercial-NoDerivs 3.0 Unported License.